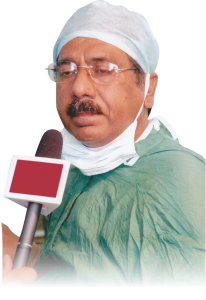 World Record holder General and Laparoscopic Surgeon Dr Tanveer Malawat completed his MBBS and MS from SP Medical College, Bikaner. Joined Government Services after completing his training but soon resigned due to lack of proper infrastructure and other facilities which were a hindrance in providing good quality services to common people. Thereafter he along with eminent personalities of medical field such as Dr SN Mishra decided to initiate Bikaner zone’s first private hospital setup.

As a consequence of working dedicatedly day and night for his patients and yielding excellent results, soon he became a common man’s surgeon with massive following in patients from not only various districts of Rajasthan but also from all over the nation. Within a few years of his service he started doing maximum number of surgeries per day in whole of Rajasthan. His popularity and name increased by leaps and bounds so did his passion for his patients. His focus always remained at giving good quality medical services to patients at a low cost with a motive to bring quality medical services to the doorsteps of the poor and downtrodden.

The philanthropist in him always encouraged him to conduct massive free surgical camps as and when possible so as to serve the needy elements of society. In such a camp he went on to operate 41 patients in 19 hours creating a world record of highest number of Laparoscopic Cholecystectomies in a single day. A few months later he improvised the figure to 50 surgeries in 23 hours which has a mention in Limca book of Records. Dr Tanveer Malawat continues to serve humanity by providing his services at an affordable cost.

Seeing the lack of World Class Medical Facilities in Western Rajasthan, as a result of which patients with serious ailments have to go to places such as Jaipur/Delhi/Ahmedabad for treatment, recently he was instrumental in establishing a World Class Super Specialty Hospital in Bikaner. For its best possible operations he handed over the hospital to leading healthcare provider of the nation Fortis Healthcare Limited, the joint venture being called Fortis DTM Hospital but with a special clause in the agreement i.e. to provide health services at an affordable cost to the people of Western Rajasthan whom he considers as his own family for the service of whom he has dedicated his whole life and still continues to add new spectrums and dimensions by means of innovations in the field of healthcare.

Having done more than 50,000 Surgeries in his career there is no stopping the passionate Dr Malawat!